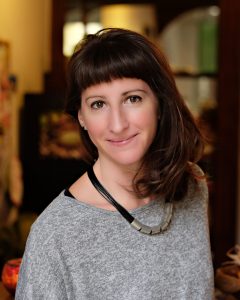 What kind of support do we need to provide to deprived women who want to become professionals in early childhood? In my previous post I talked about our REYN4 program which has trained five Romani women to become kindergarten assistants. Today: the story of Ilona, one of our mentees. I am Flora Bacso, trainer and mentor at Partners Hungary Foundation.

If you are a professional who supports deprived people, you are usually prepared for challenges. We plan carefully, modify plans flexibly, write plan B’s and C’s, look for workarounds, involve more resources. However, we sometimes have to give up on the goals that were set at the beginning.

Our most hard-working, diligent and persistent mentee is a single mother of three children under the age of 14. When she entered our program, Ilona was living in a temporary community apartment which she had to share with several families.

She was working as a cleaner in a hospital part time. That job allowed her to pick up the children from kindergarten and school. She was happy with this.

She cleaned the most critical areas because they paid well: emergency trauma rooms, operation rooms and the intensive care unit. Her superior was very satisfied with her – she was always punctual, never complained and did a job that none else was willing to.

Ilona was a mother with a plan: she wanted to  get out of the temporary home as soon as possible and rent a flat. She also wanted to get a secondary school diploma and work in the early childhood sector, that’s why she joined REYN4.

In December 2018, she qualified as kindergarten assistant. This meant that besides working at the hospital and caring after her children, she had to spend every Saturday sitting in classes and she also had to do an extra 80 hour vocational training at a kindergarten as part of the practice training.

But there was more

As this was not enough, Ilona also enrolled in another mentoring program called Chance.  The program offered to the participants a monthly allowance and consultations on how to find the inner resources to change their own lives. Ilona loved those sessions.

At the same time, she could not find a job as kindergarten assistant. Mainly because she only wanted to work part-time to be able to take care of her children.

Part-time kindergarten jobs are extremely rare in Hungary and only far away from her place.  Also, her job as a cleaner paid better than any job she could find in preschools.

So even though she was supposed to start working in a kindergarten, we agreed to pause the program.

This flexibility on our side led to a new level of trust with Ilona. She trusted us with more personal issues: she got in a conflict with a caregiver at her daughter’s kindergarten. Ilona, her social worker and I asked for an appointment from the caregiver and the principal where we openly discussed the conflict.

A week after the discussion, Ilona said that that problem was solved and that she was very grateful to us.

But one day, Ilona called me in panic. She had just moved  into a new flat, which proved to be in a very bad shape, and she had started to have major conflicts with her adolescent son. In addition, the father of her children failed to show up on visitations while Ilona relied on him so she could attend the Chance sessions. The pressure was too much.

“I am terrified of leaving the flat. I called in sick,” she said on the phone. “I can pull myself together to grab some food from the shop at the corner to feed the kids. My boys can go to school on their own luckily. But I can’t get myself to take the smallest one to kindergarten. I don’t know what to do. I am so ashamed, I didn’t dare to call anyone but you,” she added.

What shall I do? I thought. I felt very anxious. I took some deep breaths and realized that something very important had just happened: she trusted someone enough to ask for help on a very sensitive issue.

Focusing on 5 key areas, the REYN Early Childhood Research Study aims to close the knowledge gap on the status of Roma children in Europe.