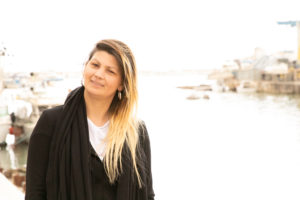 In the multi ethnic city of Mazara del Vallo (Italy), Emma Hajrusi coordinates the TOY for Inclusion Play Hub. “It has changed my life and I could not live without it,” she says.

“When I go home I never dismiss my ‘uniform’ of Coordinator. I talk about the Play Hub with my relatives, I receive phone calls and chats by parents and children who keep sending questions.”

When we meet her, Emma Hajrusi is surrounded by the children in the Play Hub of Mazara del Vallo (Italy). This is one of the two Play Hubs opened by TOY for Inclusion in the country.

A large Romani and Tunisian community have been living in Mazara for at least two decades. So the Play Hub serves a beautiful mix of children and families from different backgrounds. We meet 8 year-old Mina, whose father is from former Yugoslavia while her mother is from Tunisia; she usually plays with her best friend Fata, who was born in Italy but has parents from Macedonia and Serbia.

At the Play Hub also the families meet.  “Sometimes people from different countries think they are different. Here they also find out what they have in common. They get to know each other cultures and overcome the barriers,” Emma says.

The Play Hub had a great impact on Nerima, a Romani child with disability. Thanks to the work of Emma and the volunteers, her family overcame the fear of stigma and decided to enroll her to pre-school.

“We do not refuse anyone here, we appreciate diversity”. Emma says. “ There was an autistic child called Mohammed, 5 years of age. He was refused at other places because he was considered ‘difficult’, and indeed he was quite challenging at the beginning,” she continues. “He was throwing the toys and didn’t want to share them with other children. After a while though, he clearly started to feel more at ease and asked to play with other children.”

It is my baby

The Play Hub has marked a turning point in the life of Emma. “I was there when everything started and it feels a bit like it is ‘my baby’. I remember every single moment passed with the children and I brought home every drawing they have given to me.”

“If a toy is lost I know exactly which one is missing ad how many pieces it had,” she laughs.

One day Emma decided to go back to Skopje (Macedonia), her city of origin. She had a fiancé there and part of her family lives there, so for a while she had been wanting to go back.

“It was a difficult decision to take. I lived in Skopje as a child and I wanted to see if that was something for me,” Emma remembers.

The Play Hub then closed while the Local Action Team, the group in charge of the administration, was looking for a new coordinator.

“After a few days though, the children of Mazara started to call me asking to come back: ‘Emma, when is the Play Hub opening?’ ‘Will you come back?’”

“They were missing me at least as much as I was missing them.  So I decided to go back to Mazara and reopen the Play Hub.”

Everyone plays with everyone

As the evidence has shown, playing is fundamental in the development of young children. The TOY for Inclusion Play Hubs have increased the children’s chances of playing safely with people of different generations.

“Today adults are often looking at their smartphone or tablet instead of playing with their children,” Emma says. “We encourage (grand)parents to stay in the Play Hub and play with the children. Sometimes grand-parents come just to say hello and then start to play.”

“Even the siblings – she continues – who usually do not play with their younger brothers and sisters at home now stop-by to play with them.”

“Also, I have heard from several parents that the children who come here now take better care of their toys at home. Before children would play and leave the toys scattered around when they were finished. Now they have understood that the toys should be put back at their place.”

Concluding our interview, Emma tells us about the role she thinks TOY for Inclusion has in the life of young children. “I like to say that the Play Hub is now like a family. At first, children and parents behaved as strangers. Today they come, borrow the toys and play together. They take care of members of other families like they do with their own family members,” she concludes.