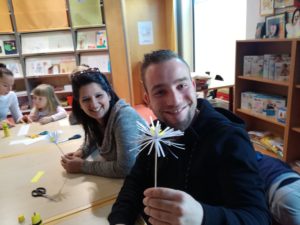 A family tells about their Play Hub experience in Murska Sobota (Slovenia).

Two brothers – ten-year-old Lan and six-year-old Žak live in the Roma settlement in Murska Sobota (Slovenia), together with their parents Anela and Alen and their grandparents. In total, there are ten members in the same household. Lan goes to the local primary school and Žak is attending the preschool in the Roma settlement.

Their parents heard about the Play Hub at their child’s preschool and once there, they were happy about the friendly atmosphere. The Play Hub coordinator, Marija, taught Žak how to play chess and now he wants to play it at home all the time. Marija also let them borrow some toys.

Eventually, the parents of the two boys decided to subscribe for membership at the Play Hub. Since then, they have been regularly paying a visit and have been attending different workshops. At one of the workshops Anela and Alen met the teacher from Lan’s primary school who gave them advice on learning and parenting.

“Children enjoy coming here, because they can play, create something together and meet new people,” says Anela. “The Play Hub is ideal for parents who cannot afford such quality toys that are available in the Play Hub. It is great that there is a possibility to borrow games or toys for children to play, learn or build something new. The playroom looks nice and everything is free.”

Anela and Alen think that the Play Hub is successful in the area where they live. In addition, it presents something new in the environment. In this way, families who cannot buy expensive toys are still able to give their children the opportunity to play with them.

“I would recommend visiting the Play Hub to any parent or grandparent, as it offers the possibility to really just hang out and play with their children,” says Anela.

Because her large family lives in a small house, it can get quite noisy there. That is also why the family considers the Play Hub to be a pleasant place where they can spend some time playing together. 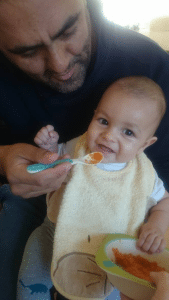 A year ago we published a blog post about the legacy of D.H. and Others v. the Czech Republic, the case that brought the segregation of Romani children on to the international agenda. On November 13, another anniversary will pass and another cohort of young Romani children in the Czech Republic, and elsewhere, will start their schooling in segregated schools, learning from their very young age that, because of their ethnicity, they will be put on a different track: a slower one.

Nine years have passed since the judgment of the European Court of Human Rights. Since then, Court rulings on segregation of Romani children have been issued against Greece, Croatia and Hungary.  A number of domestic courts, for instance in Slovakia, put segregation outside of the legislative framework. For years, civil society organizations and international institutions have been pushing for the implementation of these judgments. Recently, the European Commission joined in these efforts and started infringement proceedings against the Czech Republic, Hungary and Slovakia for segregating Romani children.

Reading through the 2007 judgment, a lot of attention was given to the role of parents who consented and sometimes even requested their children to be enrolled into segregated school. Their reasons for doing so included avoiding abuse from non-Romani children, keeping the children from the neighborhood together, but sometimes – even if not explicitly – lack of interest in education. But should they to be blamed?  In the atmosphere of omnipresent discrimination preventing even qualified Roma from getting adequate jobs?  Frustration, not tradition, stood behind their decisions.

But as long as we admit that segregation is rational, the cycle of poverty and exclusion will not be broken. In most countries, parental consent is required to place a child into a particular school. Simply put – if parents do not agree with segregated school, they can object and schools or any other authority should not push them. Most of the issues, also those listed above, can be addressed if parents get organized and demand their rights, for their children and for themselves. As hard as it may be, we must stand up and reject discrimination in all its forms.

On the day that I write this blog, my son turned 6 months old. Today, I do not write as coordinator of Romani Early Years Network, but as a father who wants the best for his child. I refuse to believe that other Romani parents do not want the same and we need to demand it now. If we are afraid that our children will be discriminated at schools, we should address discrimination, not take our children to low-quality segregated schools.

As an activist, I have spent years in advocating for better living conditions for Roma, particularly young children and their families. But being a father brings a different perspective to my approach. Strategies and action plans may provide us with a framework for doing the right thing. Strategies and action plans may provide us with framework for inclusion. But we need to insist on inclusion in the first place. And we can only do it if we always ask for nothing less than the best for our children. Be it quality early childhood services, inclusive primary schools, high schools developing their talents or colleges increasing their chances to turn their talents into a living.

Let’s invest in young children, they will pay us back.

The partners of the European project Roma Families Get Involved, with financial support from the EU Lifelong Learning Programme (LLP), have recently launched the Guide for working with Roma Families towards achieving the success of their children at school. A transnational methodological proposal for professionals”. The guide aims to provide guidance for professionals working on the ground to involve Roma families in the educational processes of their children.

The guide is available in Bulgarian, English, Hungarian, Romanian and Spanish and can be downloaded here.

In the closing meeting for the project, organized on March 21, 2013 by the Fundacion Secretariado Gitano (FSG)/Spain, Program Consultant Zorica Trikic represented ISSA, presenting on “Working with Parents”, with a special focus on social justice and equity principles, with lessons learnth from the ISSA network’s approach and experience. Her presentation is available here: ISSA Presentation_Parents_Roma_Brussels

NEW! Guidebook and Toolkit to support teachers working with refugee and migrant children
Resources for teachers as well as their mentors and supervisors and other providers of in-service training ⤵️

Play Hubs put #TOY4Inclusion at the ❤️ of the communities where they operate. The new Virtual Pop-Up Museum gives you a glimpse inside the Play Hubs!