A new report by the European Public Health Alliance (EPHA) focuses on how socioeconomic preconditions affect the health of Roma in Europe. Infant mortality is reported to be between two to three times higher than majority population.

“The worse the socioeconomic situation of a social group, the worse its health status is”, EPHA says. According to their new report, Roma are the minority which suffers the most from health problems and higher mortality. The life expectancy of Roma people is five to twenty years shorter compared to the average population.

The report is a review of both quantitative and qualitative studies, including published articles, reports, surveys, statistics, strategy and discussion papers sources.

Children are among the most impacted.

The infant mortality is between two to three times higher than the majority population. Low birth weight and malnutrition affect Roma children disproportionately, impacting their social and educational attainment.

The evidence is clear, the healthy development of a child is heavily conditioned by the environment in which they live.

We know that the “early years experiences affect the brain architecture, which provides the foundation for all future learning, behavior, and health” (Harvard). The early “experiences and environmental influences “get under the skin” and interact with genetic predispositions” (Harvard).

As reported by EPHA, poverty and school segregation affect Roma children more. Preschool attendance of Roma children is in some cases (Czech Republic and Slovakia) four times lower than national average. Also, half of the Roma between six and 24 years of age in Europe do not attend school.

EPHA calls on EU Member States to do more for the health of Roma, “because good health is a precondition for wellbeing and social inclusion”. 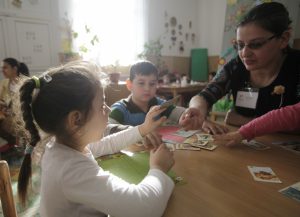 The Romani Early Years: Status Quo 2017 meeting is a joint event hosted by the Romani Early Years Network, the Forum for Roma Inclusion and the European Public Health Alliance. The meeting will bring together Brussels-based civil society organizations, foundations and representatives of the European Commission to discuss steps toward increased access to quality early childhood education and care for Romani children.

The event, held April 10, 2017 in Brussels, will summarize the current challenges Romani children and families face and address the effective implementation of the policies aimed to lessen these challenges.

Event hosts have identified several key issues with the National Roma Integration Strategies (NRIS). The first of these issues is that the strategies focus on kindergarten and preschool education, which narrows the target age group and ignores informal settings for children (playgrounds, libraries etc.). Further, the assessment of the NRIS found that some areas that impact early childhood development, such as housing rights for parents or employment, have been overlooked. Health services, like vaccinations and preventative care for marginalized Roma communities are also lacking in the strategies. Lastly, funding for grassroots programs must be systemic and there should be stronger involvement from governments in order to promote sustainable solutions.

Participants at the roundtable will discuss these gaps and the need for continuing approaches for Roma inclusion past 2020.

For inquiries about attending or for more information please contact Stanislav Daniel, Program Manager and REYN Coordinator, via the email address sdaniel@issa.nl.

For more information on our co-hosts please follow the links to their websites below.

Focusing on 5 key areas, the REYN Early Childhood Research Study aims to close the knowledge gap on the status of Roma children in Europe.