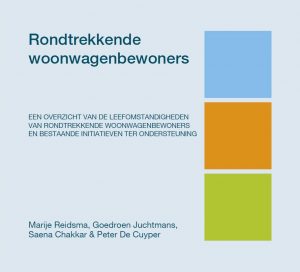 Travellers travel around for different reasons. While for some it is part of their specific way of life, in recent years an increasing number of Travellers in Flanders, Belgium have been forced to travel around due to a lack of encampment sites. This situation makes them vulnerable. Because this problem is relatively recent, however, the group of travelling Travellers has largely remained under the research radar until now. The aim of the present study, commissioned by the Flemish Agency for Home Affairs and conducted by the research institute HIVA, was therefore to gain more insight into the living and housing situation of travelling Travellers in Flanders, Belgium.

The research is focused on:

1) the living conditions and social participation of travelling Travellers,

2) the existing support, guidance and assistance for travelling Travellers.

Subsequently, policy recommendations based on the results of these two focus areas were made. Subject of the study were both Belgian and foreign travelling Travellers. Data was collected by various qualitative research methods, among which interviews with Travellers about their current and desired living situation and interviews with key figures such as practitioners and policy officers.

The resource is in Dutch language.