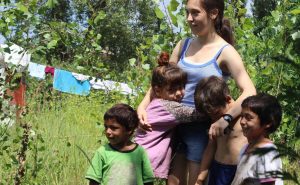 “Roma and Travellers in Six Countries” survey results were published earlier in 2020. This report presents findings from the survey conducted by FRA in 2019 covering Roma and Travellers populations in Belgium, France, Ireland, the Netherlands, Sweden and the United Kingdom. The survey included interviews with almost 4,700 Roma and Travellers, collecting information on more than 8,200 individuals living in their households.

The findings present a bleak, but familiar, picture of discrimination and
deprivation fuelled by anti-Gypsyism. Almost half of the Roma and Travellers surveyed felt discriminated against and experienced hate-motivated harassment, in the year before the survey. Yet the overwhelming majority did not report such incidents. Both lacking trust in the police and legal systems, and lacking awareness of laws and institutions to turn to, pose serious hurdles. Finding appropriate accommodation remains a challenge, especially for Travellers. Their living conditions in halting sites are often substandard, exacerbating health problems. Across the countries studied the proportion of Roma and Travellers surveyed who work is low compared to the general population and many report difficulties in making ends meet. This means that their children all too often live in households that are unable to afford basic expenditures, such as healthy food or heating. Some even go to bed hungry.

Education provides a glimmer of hope: in the countries surveyed, almost all
children between the ages of 6 and 15 receive some form of education. Still,
too many leave school early, and too few young adults are in employment,
education or training.

All the survey results can be found on the REYN Knowledge Hub here.

Many Roma live in extremely worrying #housing conditions under the constant threat of evictions.

We therefore welcome the important @Europarl_EN report on housing proposed by @kimvsparrentak and urge all MEPs to vote for it this week!

We are in the middle of a housing crisis. People across Europe are unable to find an affordable home. In the European Parliament I'm putting forward my solutions to tackle this crisis.