Home / Empowered Roma / Global Leader Lisa Smith: “I want to prove that Roma and Travellers can be successful” 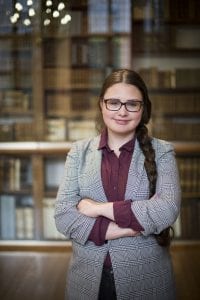 “Research shows that Romani children are behind in every single stage of their education path”, says Lisa Smith. As a Global Leader for Young Children she was awarded funding by the World Forum Foundation to create a project for her Traveller community. Her project changed the way Traveller parents thought about early years education.

This was one of the facts that triggered Lisa’s interest while conceiving her project “Knowledge is power”.

“The reasons behind this are multiple and range from social exclusion to discrimination”, she adds, “however, from research we do know that the most effective way to promote educational achievement is to ensure young children gain access to education during the pre-school years.”

As a Global Leader for Young Children (2016-2018) Lisa was one of the seven Roma and Travellers who were awarded a World Forum Foundation grant to create a project in their respective communities. She decided to focus on advocating for the importance of early childhood development among parents in Worcestershire, England. The work done by the Global Leaders was supported by our REYN Coordinator, Stanislav Daniel.

“I believe every parent should have the right access to information surrounding early childhood development. The right information that supports and empowers parents to give their children the best possible start in life”, Lisa says.

One of the parents at her workshop said: “I took for granted how important play is and how clever little ones are, I use to give my Ben my phone to play on when I was busy now I give him blocks or crayons and paper because I know now that his little brain is trying to make sense of things; it’s not just passing time”.

During her project she held ten workshops with Traveller parents of young children. She also prepared promotional materials (among which online articles and the video above) and established contacts with possible donors.

“At the end of the project, they all had an increased understanding and knowledge on the science behind early childhood development and its impact on lifelong health”, she adds.

With parents she discussed wider issues concerning fears they had for their children in education around stereotyping or of lack of knowledge of history and culture in pre-schools. They also talked about the solutions that could address these issues.

“Two of the parents were not taking advantage of the free early years provision available for their two-year old through government funding”… “Both also expressed reservations about handing over care of their children to strangers”…“However – she continues – at the end of the training they both enrolled their children to the local nursery”.

Despite her young age, 26, Lisa has already eight years of experience as a Roma and Traveller education service worker and kept working in this position even after obtaining her MA in Inclusive Education. That’s because – she says – “there is not enough of us doing this and many Romani and Traveller children today still don’t finish secondary school. For those who make it through, structures are sometimes inflexible: often the teachers’ opinions on young people and families is based on assumptions; while Romani and Traveller narratives are absent from the curriculum.”

Lisa is an extremely motivated early childhood and Roma rights advocate. She is also Youth Editor for the Travellers’ Times, a national magazine that campaigns for the rights of Roma and Travellers in the UK and is Chair of the Advisory council for the education of Romani and Other Travellers.

When asked what keeps her so motivated, she replies strikingly: “I wanted to prove to myself and to everybody else that Roma and Travellers have so much potential; and it’s the access to the right support that can unlock their potential.”

In the future Lisa shall keep looking for funds for early childhood development in her community and hopes to do a PhD to explore the policy issues that prevent targeted and measurable interventions from being implemented to improve young people’s life chances. We hope that too. For the good of all Romani and Traveller young people in the UK.