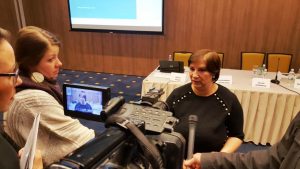 She was awarded the EU prize for Roma integration for being a “Woman grassroot activist and an unknown hero”. It’s Sanela Besic, the Executive Director of Kali Sarajevo Roma Information Center and coordinator of REYN Bosnia and Herzegovina.

“After many years there is a real recognition of Romani women’s achievements in the civil society sector,” Sanela Besic sounds proud and excited on the other side of the phone.

On March 19th, 2019, she was assigned the EU Prize for the Integration of Roma in the Western Balkans and Turkey. This years’ edition was titled “Women grassroot activists – unknown heroes” and was given to 14 Roma women who have influenced significant improvements in their communities.

“When I started in 2002 there was only one Romani woman working in a civil society. Not that they did not exist but they didn’t have any prominent role in Bosnia and Herzegovina (BiH). In the offices women would usually clean, cook or make the coffee.”

As a young graduate in law, she decided to promote Roma rights. Together with representatives of the American Embassy, she succeeded in putting pressure on the authorities of Bosnia and Herzegovina to start officially the procedure of developing the National Roma Strategy (2004) and the Action Plan (2008 and 2018).

An advocate for early childhood education

Today, Sanela is the Executive Director of Kali Sara – Roma Information Center, Sarajevo. She contributed greatly to the establishment of the REYN National Network in BiH, which is coordinated by Kali Sara.

“Early childhood education is of paramount importance for us. We need to remove any barriers that stunt children’s education, health and social integration”, Sanela says.

The REYN Network BiH is an inclusive learning community that supports access and quality of education and care for young children and promotes professionalism in services. Within the network, Roma and non-Roma members work together to develop good practice, establish effective partnerships and support professional development.

Since its establishment in 2018 it has already gathered 50 members, which include both civil society organizations, professionals, government representatives and social institutions.

On the phone Sanela sounds proud but not quite ready to rest, “we need to achieve more”, she says.

As a participant in the implementation of the Regional Project “Roma Integration 2020”, she felt reassured when preschool education was included among the priorities.

“Every child is important. That’s why we are glad that preschool education was finally mentioned.  Even more so, if we consider that this is an EU policy document which is relevant for the country’s EU accession path.”